Every year at NVIDIA’s GTC conference, the company’s CEO, Jesen Huang, reveals the latest technology that the company is introducing to the market. This much-anticipated event is something EIZO Rugged Solutions looks forward to as we collaborate with NVIDIA through our Preferred Partnership to produce new embedded GPU-based OpenVPX hardware. The 2021 fall event is being held virtually this year from November 9th – November 11th, 2021. You can learn more about this event here.

Announced at GTC, the most recent GPU technology enabled for the defense and aerospace market is the NVIDIA Ampere Architecture, the second generation of the NVIDIA RTX platform. This architecture consists of GPU processing improvements, with specific performance upgrades in GDDR6 graphics memory, deep learning, and increased bandwidth speeds.

Autonomous vehicles such as UAVs must have the highest efficiency computing systems to ensure accurate vision and perception in SWaP(Size, Weight, and Power) restricted environments while not sacrificing performance. High-Performance Computing (HPC) systems running at the edge require the utmost powerful GPGPU processing hardware per watt to assure advanced AI and machine learning algorithms can execute on the expected workflows.

Most importantly, lives depend on the systems used in mission-critical environments. The computer systems completing the sensor analysis and mathematical calculations require extreme accuracy to ensure missions are safe and successful. AI and Machine Learning (ML) runtimes for radar tracking systems, weapon systems, and ISR operations need optimized hardware to assure that precision can also be executed within a timely manner.

NVIDIA’s Ampere brings many benefits to embedded systems as it provides performance boosts in both traditional render applications as well as GPGPU operations like target detection using both traditional and AI/ML methods. With increased support for “AI at the Edge”, the technology brings new levels of computing power to data-driven applications.

The new third-generation Tensor Cores expand on deep learning matrix arithmetic to influence neural network training and faster AI-inferencing to allow for even the most complex models to be inferenced at the edge. The baseline performance of these new cores provide 2-3x improvement over the previous Turing generation Tensor Cores.  Additionally, the Ampere Tensor Cores support the new hybrid Tensor Float 32 (TF32) data type, unlocking the numerical range of FP32 while keeping the efficiency of FP16.  This new data type along with the base improvements and new sparsity feature can provide upwards of a 10-20x the AI/ML model processing throughput compared to previous generation tensor cores, all with no changes to the underlying software.

With up to 2X the throughput over the previous generation and the ability to concurrently run ray tracing with either shading or denoising capabilities, the second-generation RT Cores deliver massive speedups for real-time rendering. This technology also speeds up the rendering of ray-traced motion blur for faster results with greater visual accuracy which could have large impacts in the simulation and radar processing fields.

With generational upgrades in both RT Cores and Tensor Cores, the Ampere GPUs are an ideal solution for computationally intensive AI accelerated applications such as raw video rendering and streaming, image analysis, object tracking, and motion detection. This is all in addition to the massive 2-3x improvement per watt to the base streaming multiprocessor allowing the Ampere architecture’s CUDA® cores to be twice as power efficient compared to previous generation Turing GPUs.

The Ampere family of GPUs are the first to support PCI Express Gen 4, which delivers double the bandwidth available from PCIe 3.0 busses. PCIe Gen 4 supports up to 16 Gigatransfers/second bit rate, with a x16 PCIe 4.0 slot providing up to 32 GB/sec of peak bandwidth. This extra bandwidth allows for customers to take full advantage of the latest generation architecture processing speeds.

The inclusion for PCIe Gen 4 is even more important to embedded systems within the defense market as the newly released Revision 1.0 of the Sensor Open Systems Architecture (SOSA) technical standard introduces new profiles requiring Gen 4 PCIe for SOSA-aligned HPEC systems.

EIZO is the first to market with a rugged Ampere-based OpenVPX 3U form factor HPC graphics and GPGPU card. The Condor GR5-A2000 is an embedded 3U VPX HPEC graphics and AI-enabled GPGPU card that is built with the power-efficient NVIDIA Ampere RTX A2000 GPU. The A2000 embedded GPU variant hosts 2560 NVIDIA CUDA Cores, 20 RT cores, and 80 Tensor Cores, along with the industry’s best H.265 (HEVC) / H.264 (MPEG4/AVC) encode & decode engines.

The Condor GR5-A2000 has support for traditional DisplayPort and Single-Link DVI outputs, but additionally supports 2x 3G-SDI displays for integration in the most rugged environments. The GR5-A2000 is it the first GPU to the market supporting PCI-e Gen4 to unlock the true potential of newer generation CPU and payload cards while maintaining a SWaP optimized max power footprint of 70W and configurability to reduce clocking down to enable lower power footprints. 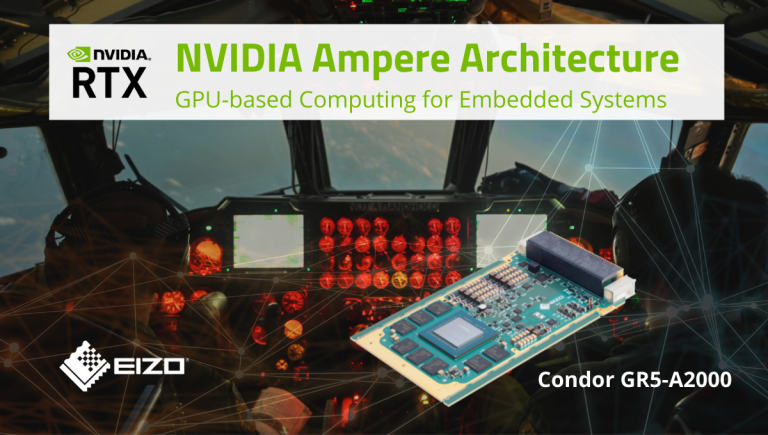